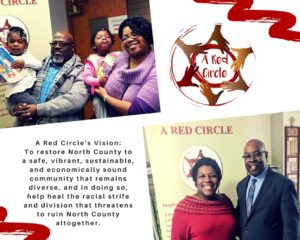 August 9, 2014, my brother and I were on our way to Six Flags and we kept seeing cop cars flying down I-270 in the other direction.  We didn’t know what was going on. I was working at a corporate law firm in Clayton, attending an evangelical church. We were members of a small group Bible study with other middle class Black couples and, we were living the American dream.
Two years prior, I had earned my MBA, and was devising a plan to use my law firm connections to spark some interest in revitalizing North County.
Although I live in Florissant and worked in Clayton, the trek to and from did not overshadow the vacant homes, commercial buildings, lack of healthy restaurants, and other entertainment. I didn’t need to read a report to tell me this.   I knew we needed better jobs and public transportation infrastructure, and more tax revenue for our schools. I was feeling excited and ready to convene a North County Economic Development Summit. Just me and my partners.
Michael Brown’s killing changed the trajectory of my life.  The only vigil of sorts I had ever attended was for Trayvon Martin in 2012.  In 2014, I attended my first protest and really began to understand the pain members of my community felt. The degradation and humiliation of Black lives. The debasement of Black men. The sheer hopelessness that, if a White cop could kill a Black teen, when the cop was the only one with a gun, then leave his body in the street for four hours, then cart him away in a police car, and face no repercussions, then my life and my kids’ lives did not matter to them.
Things were never going to be the same for me.  I remained at the law firm for three more years but, relations with my coworkers changed.   Many of them sided with the cop. My church friends changed and, eventually my church.  Those good White Christian folks used terms like thug and welfare queen.
Five years later, I now run a nonprofit organization to do the things I set out to do when I got my MBA, but now through a racial equity lens.  This path has not been easy. Support from some has been steady, while from others it has wavered.  Recognition of my role as a leader in nonprofit space is slow in coming. But, all of that is okay.  I have a job to do at A Red Circle and I will do my best to accomplish its mission, “The holistic betterment of our community; reversing the effects of racism one person and cause at a time.”  Why? Because my community matters.  Black lives matter. And all blood is red.
-Erica
General