The Toxicity and Violence of White Solidarity: Team Racism -versus- The Honey Pot Company

I wish I could say that I am sheltered enough to be surprised by racism/white supremacy.  I’ve accepted that racism is a team sport and most White people know how to play the game…consciously and otherwise.  Truth be told, I would not trade awareness of our collective reality for the naivete that once stunted my development.  Instead, the innumerable examples of racism/white supremacy that populate my news feed harden my resolve for anti-racism and centering Blackness.

Today, like most others, I spent this morning consuming news about public health, the economy, politics, and the latest updates about how racism/white supremacy has struck, again.  One of the stories that caught my attention relates to a Black-owned feminine hygiene company called The Honey Pot. In short, White women and men felt excluded by a Black female entrepreneur expressing gratitude for retailer Target helping her build her brand, including in-store product placement. Mostly though, White folks felt excluded by the Black entrepreneur expressing that, by Target empowering her, it will help Black women and girls with ideas KNOW that their ideas can become their entrepreneurial reality. That was enough to spark feelings of “white oppression.”  Because, Black women naming our reality makes White people feel underrepresented!  It’s illogical and doesn’t make sense, but, of course, that feeling of exclusion/oppression sparked mass white violence.

Not only did White folks collude to down rate this company online, in their fake reviews, they also disparaged Black people, Black body parts, and Black women, in particular. From the avatar names the fake reviewers used to the content of the reviews themselves, racism prevailed.  Racism prevailed in white solidarity and agreement to exercise collective malice. 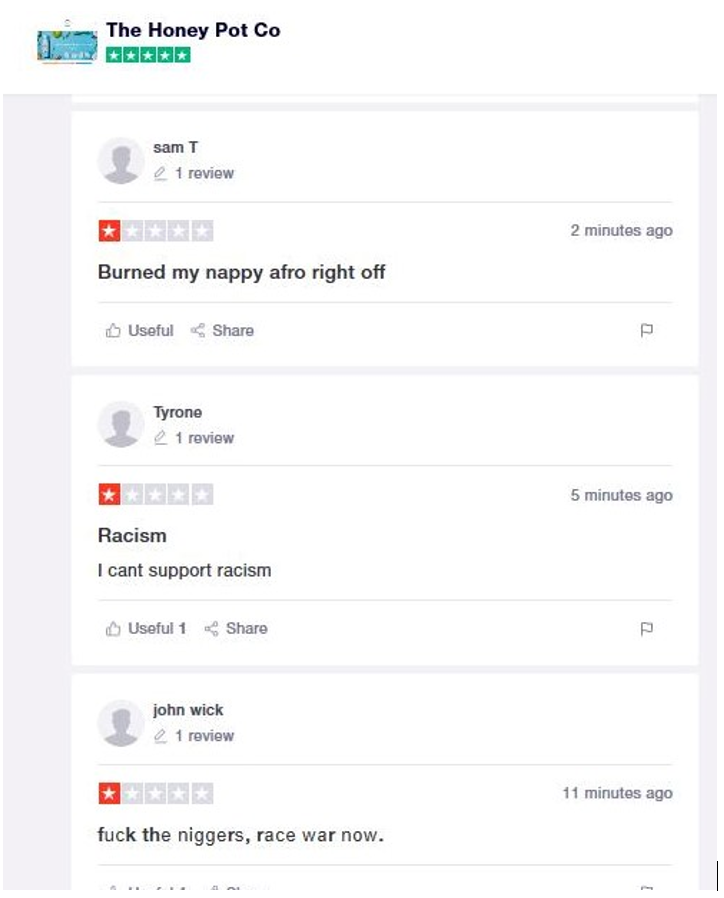 There are thousands more from these faceless anti-Black warriors.

What other racist statements/actions do these people take when they think they can get away with it?

Did they consider the harm their actions would cause to the company, the employees, or the readers?

Would these people have participated in the riotous demolition of Black Wall Street?

I suspect that too many “well meaning” White folks (and Black folks) will classify these reviewers as “trash.”  They will make other statements that push these White reviewers to the margins of white society. But, did l tell you there were thousands of these down reviews?

These reviewers are not the margins.  Their fragility and toxic solidarity are the center.

Their beliefs are the crux and cradle of whiteness.  And, they are not monsters, per se.  They are family members, significant others, co-workers, neighbors, supervisors, caregivers, and members of community organizations…. perhaps even your own.

White America, they are you.

America, they are what we’ve allowed.

This toxic solidarity is what drives so many creative Black women and men to pursue entrepreneurship in the first place. To avoid/escape white supremacist culture in organizations. To get out and away from co-workers, customers, board members, executives, and supervisors just like these reviewers.  To save themselves: economically, socially, and psychologically.  To leverage their ingenuity for themselves, rather than continuing the fight to have their humanity validated in the white-run companies that rely on their often-unnamed contributions.

IF we continue to allow White people to shut down or act out when Black folks name our lived reality, we will continue to have the same conversations generation after generation.

When you have been assigned the role of being the center of EVERYTHING (i.e. white identity) …it feels like oppression and exclusion to have other people name the ways in which they have been marginalized by your assignment.

Beatrice Dixon, founder of The Honey Pot, and businesses like Target, keep inspiring Black girls/women with ideas to own their ideas, for themselves.

By the way, here is the Target commercial spotlighting The Honey Pot:

To learn more about The Honey Pot Company visit them online here: 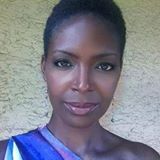 Pamela “Denise” Long is a doctor of education student of organizational leadership/development with research centered on executive leadership of racial equity by way of anti-racism. Through research and consulting, Denise focuses on how racial identity affects service relationships and institutional practices.

One Response to The Toxicity and Violence of White Solidarity: Team Racism -versus- The Honey Pot Company